I have learned much about the essence of being human through Tom Logan, co-founder of Marion Medical Mission.  He and his wife, Jocelyn, have directed the Shallow Well Program for the last 25 years, helping to install about 27,000 shallow wells in Malawi, Tanzania, and Zambia, Africa.  Those wells have enabled three to four million villagers to have safe drinking water.  Only a small number of them have ever had safe drinking water, “since the beginning of mankind,” according to one of the village elders my wife, Susie, and I met in Malawi last fall.  We are proud to have assisted with 144 wells of the 2,754 installed in 2016, and we are planning to return to Africa in the future. 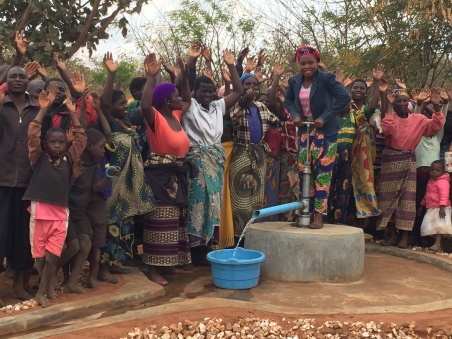 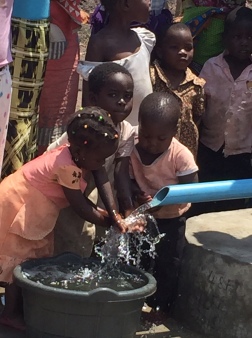 Notice I said “assisted.”  Tom was very clear that the wells belonged to the villagers; we were only there to assist.  They located the subsurface water source, dug the 15 to 25 foot well, formed and baked the clay bricks, laid the brick walls of the well, and created the concrete cap to keep the water clean and apron to drain away excess water.  We Americans raised the $450 needed to pay for the cement, pipe, pump, and wages of the African field officers, well building supervisors, and installation supervisors.  We Americans drove Toyota Land Rovers loaded with well parts over rough terrain to remote villages.  Once there, we recorded the GPS location and construction data on an android, checked the quality and safety of the well, and celebrated the completion of the well with a dedication ceremony.

Only together, Africans and Americans, were we able to be who God created us to be.  Only together did safe drinking water become available to thousands of villagers.  Together, people of color and white people actualized a dream, became friends and established relationships, and served one another.  Together, we sang songs and praised God for His goodness.  The attached video is a gift of song to my wife and me for coming to their town in Malawi and assisting with wells.  The verses are, “Who will enter into Heaven?  Our father is there.  Only the holy will enter.  You are holy.  Enter into Heaven.  Our father is there.”  Susie and I felt we had entered into Heaven for those moments of the song.  I still tear-up when I watch that video.  Gestures of love from God’s children are powerful.  The people of Malawi have such open and warm hearts.

I write this story to illustrate how people who are different can effectively come together and achieve a dream.  In this land the “American Dream” is at stake. The only way people of color and white people can actualize that dream is to become friends, establish relationships, and work together, as we did in Africa.  The time for such an encounter is now; it is long past due.  And, if we do not succeed today, what kind of world will our children and grandchildren inhabit tomorrow?

Ubuntu, I am who I am because of who we all are.  Invite the Table Setters to your church, school, business, or community organization and allow them to facilitate relationship building.  It’s diversity training on a personal level.  Many of us know very little about people who are different.  Come to the table; share at the table; stay at the table; and come back to the table.  Only through relationship building can we learn who we all are and, as a consequence, learn who each one of us are.  I am because we are.

It’s been 11 months since we displaced ourselves from Los Angeles to Detroit.  But yesterday, I got to come back to Hollywood, thanks to an incredible exhibit called “Displacement and Gathering” at First Presbyterian Church of Hollywood which featured a live artistic performance of a Table Setters gathering around a table to discuss race, politics, the idolization of all things white.  We talked about what we might learn from other cultures, other perspectives, and other people with whom we might expect to disagree with, be afraid of, be opposed to meeting.  We talked about why God created diversity to begin with, if it wasn’t to learn how to appreciate God’s love for beauty in variety.

Marvin’s All-American photos and videos with quotes by Frederick Douglass and Andre Henry were featured alongside original artwork by Hyung-in Kim, Maria Fee, Anne Baumgartner, Andrea Kraybill, Brian Fee. I want to let you have a glimpse of that work below.

For me, personally, I felt “gathered,” after being displaced.  I was invited to play piano again during the worship service.  I was invited to dinner with old friends.  I got to hang out with the old team of Discerners from the Gregory avenue neighborhood, kids I knew since they were kids, and now they are all hovering around 21.  It was great to be gathered back.  But I also thought of how many people get displaced and are never able to return to glimpses of home.  I think of Native Americans pushed off their land.  I think of people living homelessly in Hollywood who get shuffled along, especially during the Oscars, every year.  I think of warriors snatched out of their homelands to come build a country for white men.  I think of refugees fleeing impossible situations, either economically or politically, to do right by their families, to survive.

I think of all the many people in Detroit who’ve been told their house is not worth the cost it would take to fix the roof, so they just have to slowly let the water seep in.  I think of what it might mean for us to turn back that tide.  I think of what it might take.  I pray to God we have the strength and courage to dismantle the walls that divide us, and I think Whiteousness has always been one of the most formidable.  Like the forcefield blocking entrance to the planet with all the secret codes in Rogue One…..

This week: we moved into a new house.  Another displacement and re-gathering.  We are trying to buy this house, but are facing challenges because, like many of our neighbors, it is not being valued as high as the seller is hoping to sell it.  What is value, and who decides?  The nature of this post is understandably scattered and questioning, which I think fits well alongside the artwork to follow.  Let it speak to you too.

What if we could allow everyone to be considered, “white?” Of course, i think that would be a terrible idea, as whiteness is the problem.  But, what if we could truly understand each person as a beloved child of God, as beautiful as God intended?

But first, listen to the incredible Diane Ujiiye deliver an opening prayer of sorts through spoken word: 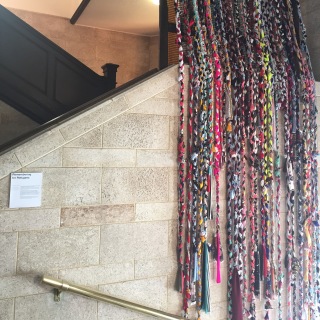 “Remembering for Refugees” by Hyung-in Kim: the interlacing strands were produced in art workshops. In these educational venues the artist directed participants in the shared activity of braiding bands as a pedagogical tool to raise awareness of cultural diversity and to build empathy. Her project also commemorates the 25th Anniversary of the LA Riots. 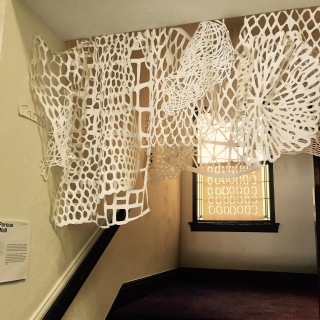 “Pourous Wall” by Maria Fee: a wall is erected as a barrier: it can contain, or it can keep things at bay. Boundaries are necessary to create distinction. Yet when a wall is impenetrable, how can relationships occur between what’s inside and outside? When a wall is too high, how can the strange draw nearer to become more familiar? 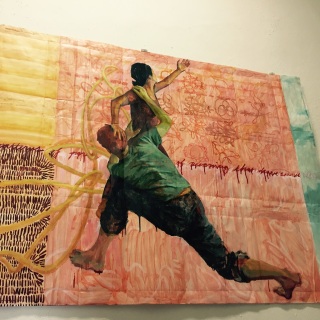 “Alienation” by Brian Fee: to exist is to struggle. In attempt to elevate the self, someone else may be pushed away. This brings about a double alienation: the one who is cast off, and the offender left alone. 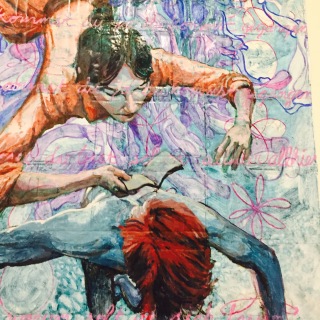 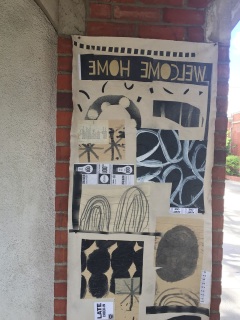 “Gather and Embrace” by Anne Baumgartner: welcome can function in many ways, both literal and symbolic. Through words, expressions, and physical space, God utilizes the particularity of place to gather the many in order to embrace them. How can we create room for each other and also the Holy Spirit? 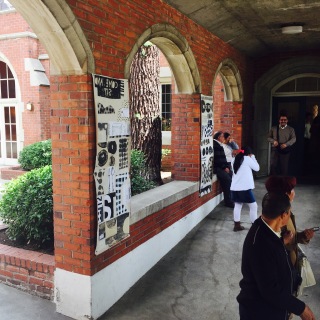 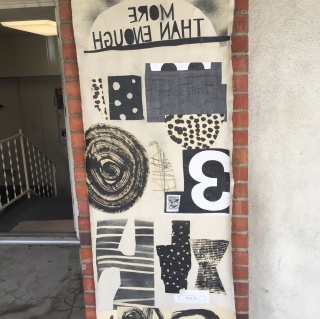 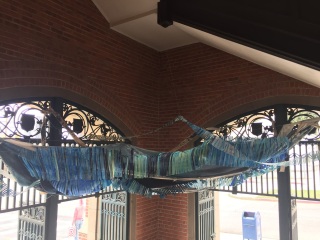 “Interwoven” by Andrea Kraybill: the multi-layered bands installed above the church’s entrance, found near the intersection of two streets, further speaks of hospitality. It provides an alluring invitation for passersby to enter into a meditative space for renewal and refreshment. 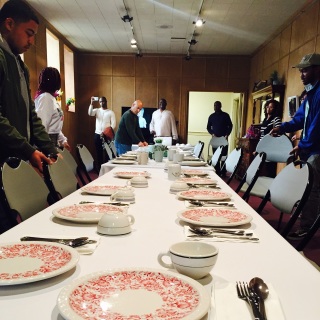 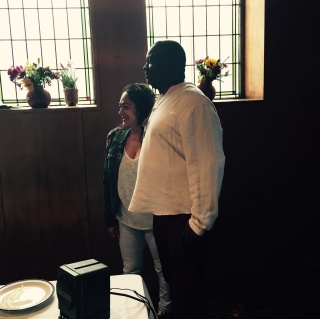 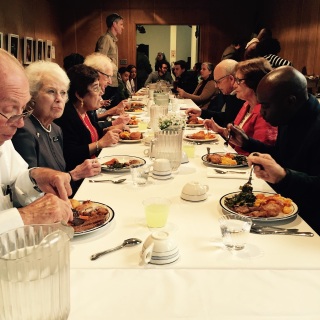 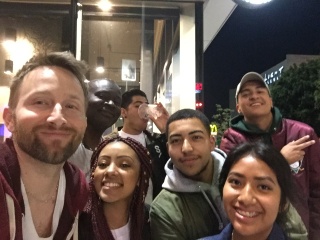 Matthew shared a story at the first #DetroitStories event at The Studio Detroit about when he learned what “turn the other cheek” actually means.   It was supposed to be about redemption, which is a huge word, but Matthew believes we often experience redemption in small ways, person to person, when we take off our masks and really look at each other’s humanity.

The philosopher Jacques Derrida relates the way the alien in our midst questions long-held assumptions, norms, and customs. This could lead to acts of hostility or hospitality. Through a cluster of art installations at FPCH near Carlos Street entrances to the sanctuary, the poetic becomes the means to metaphorically display the way the strange and the stranger, variety and form, enables possibilities for insights and assists in welcoming what is other. This includes opening participants to the mystery of the Triune God. This notion is explored in Hyung-in Kim’s collection of braids showing how three differing fabrics can interweave to become one strong and beautiful cord. Besides relating the oneness and diversity of God, the braid also speaks of human ethnic and racial diversity tied together to create new cultural forms and unions. Furthermore, the visual elements of displacement and gathering characterized in these installations bears affinity to a major theme that runs throughout Scripture: the hope for accord amid human alienation from God, others, and the land. Visit installations by Anne Baumgartner, Brian Fee, Maria Fee, Andrea Kraybill, Hyung-in Kim, and Marvin Wadlow. Most of these artists will be available for conversation on May 7th after 11:00am service, 12:00pm-2:00pm.

Here is the NPR All Things Considered story about Hate in Schools that they mention: http://www.npr.org/sections/ed/2017/04/05/522718288/fighting-hate-in-schools